NEW ORLEANS — For nearly 150 years, the Rex Organization and its storied traditions have helped define Mardi Gras. On Wednesday, Rex, the King of Carnival revealed its 2021 Proclamation and Edict to the masses.

Throughout history, the organization selects a local artist to design its proclamation celebrating carnival, and this year Shelley Hesse was chosen. Hesse is a New Orleans painter who is inspired by nature. Her work in watercolor and gouache paper typically depicts the large birds of Louisiana, the wildlife of Africa, and unique sea life.

As described by Hesse, “This year’s proclamation was borne as a symbol of our great city’s endurance; the riderless captain’s horse embodying the spirit of Mardi Gras and the Rex Organization — which gallops on. It represents a bridge between what we have all endured and what is waiting for us on the other side — healing, prosperity, and life.” 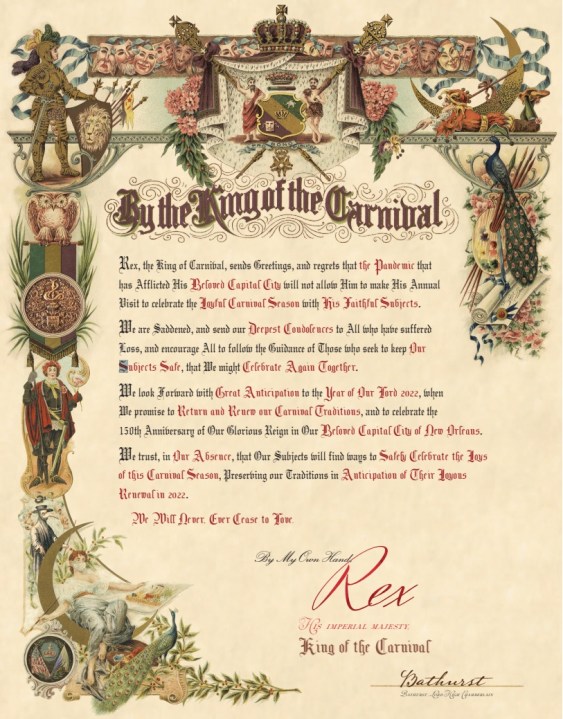 Since its earliest days nearly 150 years ago, Rex has issued royal messages declaring Carnival celebration and commanding his subjects to gather and join in the festivities.

When Rex, the King of Carnival and Monarch of Merriment, began his reign over Mardi Gras in 1872, New Orleans was struggling through the years of Reconstruction, and civic leaders wanted to attract more visitors to the city. Rex’s royal messages were posted in newspapers and train depots around the country, and Mardi Gras in New Orleans became a major tourist destination.

On King’s Day in years past, Rex has issued similar edicts inviting all to come to New Orleans to celebrate Carnival, and, with the help of New Orleans tourism officials, those invitations have been circulated worldwide.

This year, in the midst of the COVID-19 pandemic, the King of Carnival greets his subjects with a different message, appropriate to the challenges of this Carnival season.